Our installations of the Solar in November 2019 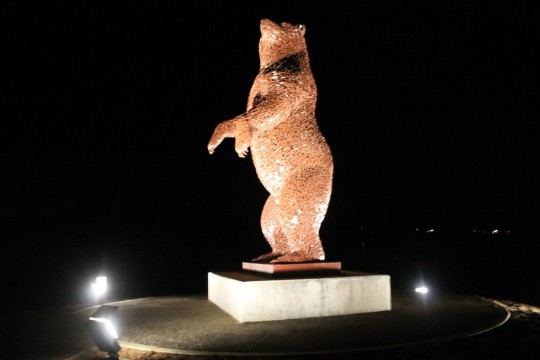 A steel sculpture of a bear in tribute to conservationist John Muir has been unveiled in Dunbar, East Lothian.

Sculptor Andy Scott other work The Kelpies at Falkirk

The sculptor we are working with also did The Kelpies at Falkirk.

This bear is to commemorate the work of John Muir, a local Naturalist who founded the national Parks in America. We have always seen the Solar aspect of this project as a real winner given the context with nature.

East Lothian Council wanted to pay a tribute to John Muir a local naturalist who was famous for his inventions and travel expeditions In America.

Many contractors were employed to install and light up a steel sculpture of a Bear.  This can be seen from the A1 motorway outside the town of Dunbar which is about 10 miles before reaching Edinburgh.  It stands prominently in a similar aspect to the Angel of the North or The Kelpies at Falkirk.

It was decided that the bear should be lit up using the best Eco-friendly option which is Solar Power.  Select Solar Limited were contracted to design an all-encompassing off grid solar power system.

Select Solar are qualified Electricians and Solar Engineers, we have worked/managed many installations including large scale projects to small commercial and domestic PV systems.  We were invited by the main contractors to carry out the design, supply and install of the power bank that lights the Dunbar Bear up.  We travelled from Upminster Essex to Scotland and spent 3 days fixing up the off-grid equipment.

After a successful install the Select Solar Team returned to Essex triumphant with their endeavors.

For and on behalf of Select Solar Limited